skip to main | skip to sidebar

"Tucson's Lisa Otey ripped up the keyboards with a bluesy command. "
Posted by Lisa Otey at 4:32 PM No comments:

Art and history will meet again when the Tubac Jazz and Blues Festival returns to Parque de Anza on Saturday, March 31, from 10 a.m. - 5 p.m."Following the tremendous success of last year's inaugural festival, the event promises to be an extraordinary day of musical performances that are not to be missed," a spokesman said.Brasher Real Estate, the Tucson Jazz Society and the Tubac Chamber of Commerce will present the event featuring: From 10 a.m-10:45 a.m. swing to the big band music of JAZZWERX; from 11 .am.-11:30 a.m. enjoy young talent with the Rio Rico High School Jazz Band; from 11:45 a.m.-12:30 p.m. savor the sounds of Lisa Otey and the Desert Divas; from 12:45 p.m.-1:30 p.m. the contemporary jazz group and Grammy-nominated Les Baxter Factor takes the stage; from 1:45p.m.-2:30 p.m. "Blues, Brazilian and Bop" with Soundscape Sedona; from 2:45 p.m.-3:30 p.m. relish straight ahead jazz with Joe Bourne and the Tucson All-Stars; from 3:45 p.m.-5 p.m. the Phoenix Jazz Divas will bring the festivities to a rousing finale.Tickets are $28 per adult, $14 for children 12 and under, and are available online at www.TubacJazz.com.Tickets will also be available through the Tucson Jazz Society (520) 903-1265, and the Tubac Chamber of Commerce (520) 398-2704.Seating and visors will be provided.
Posted by Lisa Otey at 8:27 PM No comments: 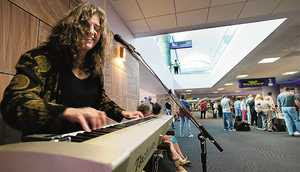 
When Tucson International Airport put out a call for musicians who wanted to perform in its remodeled baggage-claim area, the first one who phoned was Lisa Otey.

A blues vocalist and pianist who has performed at countless venues in the Old Pueblo over the years, Otey was promptly booked — but that's not all.

A go-getter of the first order, Otey gave TIA some pointers and helped put this unusual concert series together, said Paula Winn, a spokeswoman for the airport.

Otey kicked off the Live at Tucson International Airport series with an hourlong set Monday afternoon. Standing at the keyboard and with her voice sounding as strong, sultry and nuanced as ever, she performed "Stormy Weather," "Georgia on My Mind" and other jazz standards. At one point, she even managed to get a call-and-response thing going.

"Welcome to Tucson," she said, playfully interacting with travelers. "For those arriving on United flight 1208 from Denver, your bags will arrive shortly on Carousel Three."
She laughed.
"I always wanted to be an announcer," she said.

Otey, among the hardest-working divas in town, seemed to take seriously her role as the airport's tuneful greeter for the hour.
"Before y'all head out into that hot sun, relax and have yourself an iced mocha or maybe a cookie," she said.

Along the way, she plugged Arizona Theatre Company's "Love, Janis," which opens in previews next Thursday and continues through April 9 at the Temple of Music and Art. Otey plays keyboards and sings backing vocals in the production.

Otey saluted the Janis Joplin musical with a lively, fresh take on "Me and Bobby McGee."
The day after the airport show, she looked back and called it "a cool gig."
"Some folks treated it like a brown bag concert. We had about 10 that came just for the show."

The crowds will be a bit larger on March 31 when Lisa Otey and the Desert Divas perform at the Tubac Jazz & Blues Festival. The ensemble should hit the stage at 11:45 a.m.
For information about other upcoming shows, go to www.lisaotey.com.
Posted by Lisa Otey at 4:18 PM No comments: